An illustrated short story, bound like a handmade book, will be presented during an exhibition presenting objects from the story as well as from the production of the book.

Rightly launched in the premises of Moviment Graffitti in Valletta, the new Dar Imħawra concerns two friends preparing for a demonstration, written by Noah Fabri and illustrated by Martina Farrugia. The book and the exhibition explore the life of material objects in relation to activism and domesticity.

“After working together on the artwork for the Karmaġenn album, we wanted to collaborate again and mix our mediums,” the artists said of their latest project.

“Back when the first wave of COVID hit, Noah was working on a short story about domesticity and finding solace in social bonding. Martina joined us in providing the illustrations, and as the work progressed we realized the importance of the objects both in the story and in what we wanted to create.

“From the banner created by the characters in the story to the utensils they use to cook, the objects in and around the story inform different and complementary aspects of their lives. The story itself is about the responsibilities and conflicts of being an activist, but beyond that the end objects created are an attempt to try to share stories in a different way.

Part of setting up the binding.

Books are often not treated as objects or as items of material culture, as the object nature of books tends to be obscured by their content. Tess Ebonie Sammut, an anthropology student researching books within Maltese material culture, notes that books as physical objects “act as memories and media to communicate identity, status and interests. to others as well as to ourselves ”.

When asked how their exploration of physical book production influenced their perceptions about them, the two noted that the collaborative nature of book production is obscured by the notoriously exploitative dimension of the book industry.

“We are deeply indebted to Wayne Flask who edited the text and helped shape it, Ray Fabri for proofreading, Peter Mifsud of ProPrint for his printing services and Glen Calleja for his advice and support throughout. process.

“Writing is as collaborative a medium as any other, from stories stretching back generations to a single author, to huge teams of editors, assistants, designers and so on. who work in the publishing industry.

Unfortunately, all of this is in the contemporary neoliberal economy, often obscured by the cult created around the idea of ​​the individual author, who can live in a cloud while his books are made by an industry that exploits workers at different stages and in different ways. “

The artists stressed that it was important for them to manage the whole process of creating this book to truly understand the work that goes into its creation as a material object. 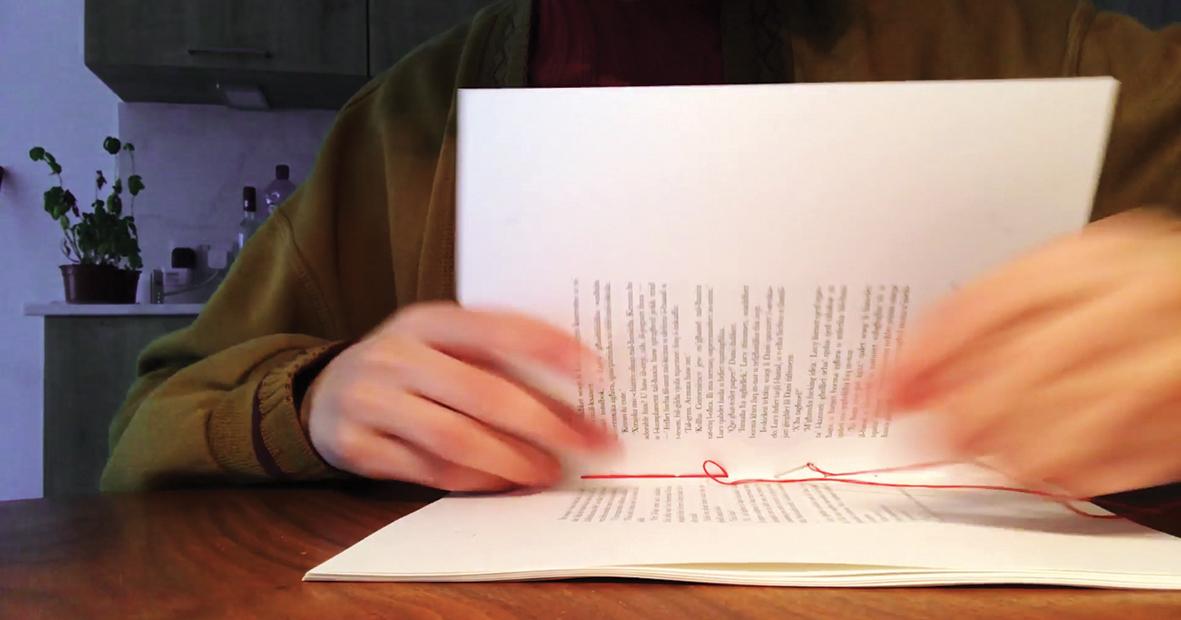 The signatures of the book being sewn.

“For so long, the books thing was either ignored, or its commodity status crystallized as a status symbol (in, for example, insanely expensive editions of classic literary works made to sit on the shelves of the rich).

“We think it is important to address the fact that, despite calls for literacy and the democratization of literature, books and the literary world are still inaccessible to the greatest number because they have always been the toy of the middle class. Stories and objects, on the other hand, belong to everyone.

Binding the book itself rather than going through the usual gestures of getting it printed could be interpreted as an act of protest. Bookbinding is a stubborn affair – the bookbinder protests against the supremacy of machines and the status quo, thus claiming supremacy with his own hands, his own capacity for success or error, his own capacity for creation not ceded to others.

“Going through this process has allowed us to separate our ideas from literature and art from the institutions we are so caught up in attaching them to. We have noticed that the objects that emerge as the characters negotiate their life as an activist, while supporting and comforting each other, reveal an often unrecognized story, where the stories are contained not in printed words but in objects, in the utensils used. in a cuisine handed down from generation to generation, in messages written on banners and signs, etc.

“In keeping with feminist methodologies, appreciating and valuing modes of expression and work that are not part of the capitalist canon, we have noticed that these neglected ways of spreading stories can be highlighted by pointing to the work required to the production of books. “

Dar Imħawra will be launched at Moviment Graffitti’s premises in Valletta on July 17 and 18 between 10 a.m. and 5 p.m. Walk-ins are accepted but only three people are allowed in at a time, so reservations are recommended. To book, send a DM on Instagram to @ noah.fabri or @martinafarrugia. Masks must be worn at all times.

Independent journalism costs money. Support Times of Malta for the price of a coffee.