Introducing the 26th Annual Texas Book Festival, All of You – the Heart of Austin Literature, where the advent of print is still celebrated more than 500 years after Gutenberg returned his dance card. And, yes, the festival is mostly a virtual affair this year, as this damn pandemic persists. But there are also in-person elements – an array of children’s programs at Symphony Square (1117 Red River) on Saturday, October 30, and a handful of adult presentations at the Austin Central Library (710 W. Cesar Chavez) on Saturday, October 30. Sunday October 31 – and of course the vast virtual part of this bookish hubbub is also worth shouting about. And we have recommendations for you – for both aspects – right here …

The Pulitzer Prize-winning author of Nickel Boys and The Underground Railroad returns to the Texas Book Festival to discuss his new book – “part heist novel, part family saga … an early 1960s love letter to Harlem”. Well of course we recommend this one. Because Pulitzer? Because the HBO series? Yeah, no we’re not even that caught up – but our minds are still in shock that we absorbed Whitehead’s weird glow earlier. Intuitionist and Zone 1. In line. Mon, Oct 25, 12:45 p.m.

If the title of this one has caught your eye, you’ll be happy to know that this is a discussion featuring Austin author Edward Carey (The swallowed man) and Ethan Rutherford (The southernmost and other stories). And if that’s not convincing enough as Halloween gets closer and closer, note that this talk’s moderator is Deb Olin Unferth – whose own Barn 8 is about two US egg industry auditors who go rogue and plot to steal a million chickens in the middle of the night. In line. Mon, Oct 25, 7 p.m.

The Year of the Plague: Pulitzer Prize Winner Lawrence Wright in Conversation

New York Times Best-selling author Lawrence Wright discusses The year of the plague: America in the time of Covid – an exploration of the origins and medical, economic, political and social implications of the COVID pandemic – with Texas Tribune co-founder Evan Smith. Want full and in-depth coverage on this topic, fellow pandemic survivor? Wright will provide it, as he does for so many subjects. In line. Thu, Oct 28, 10 a.m. 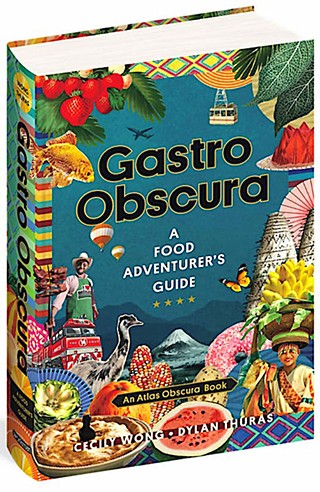 Mist-based beer, millennial egg ovens, dinner in the sky and more: a conversation with Cecily Wong of Gastro Obscura

Gastro Obscura: Gastronomic Adventurer’s Guide by Cecily Wong and Dylan Thuras of Atlas Obscura is a detailed and beautifully illustrated exploration of food “as a gateway to a better understanding of history, science, art and tradition”. Author Wong, in conversation with Nadia Chaudhury of Eater Austin, will reveal how people on all seven continents prepare food, eat, drink, and gather around the table. Do you think your habit of putting cold cranberry jelly in hot miso soup is weird, citizen? Think a bowl of Chex Mix with sautéed crickets is the craziest thing imaginable? There is a whole world of cooking there. In line. Sat, Oct 30, 2:45 p.m.

The Devil’s Treasure: A Conversation with Mary Gaitskill

Safe bet: if you’ve ever read Gaitskill’s short story collection in 1998 Bad behaviour, the stories are always on your mind. And if you’ve read any of those stories, you’ve probably also devoured what it has produced since then – the stories, the novels, the essays. Listen: Gaitskill’s latest book features excerpts from his previous novels, including the 2005 one Speedwell and 2015 Mare – all put together with author commentary, and all linked by the story of a girl named Ginger who discovers a portal to hell in her own backyard. In person at the Austin Central Library and online. Sun, Oct 31, 4 p.m.

The Texas Book Festival runs from October 23 to 31. Register for events online at texasbookfestival.org.