Black Thought of The Roots has released their new audiobook titled 7 years Thursday July 8, 2021. The book debuted exclusively in the United States as part of the Words + Music series covering the intimate journeys of musical artists such as Sheryl Crow, Smokey Robinson and more on Amazon’s Audible platform. In 7 years, Black Thought examines his life and career in dynamic seven-year increments.

“It’s been almost two years since it’s been brewing … and I’m honored and thrilled to announce that my new @audible original track ‘7 Years’ is out today,” the Roots rapper explained in a post on Instagram. “It’s inspired by one of my life theories that every 7 years I should actively work to become better creatively, emotionally, personally and mentally because my body is also changing and new cells are replacing elders. So in this piece of words and music, I share some of those key periods that made me the man I am today – with an original musical score that highlights the very first freestyle I have ever had. never wrote our classics @theroots to the performances of some of my more recent pieces. 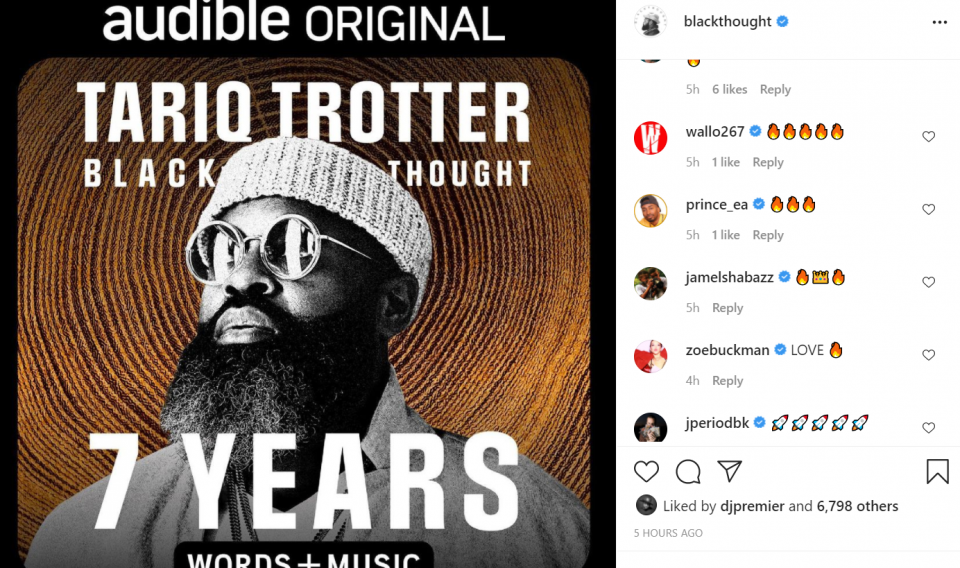 With a powerful and personal musical score, the “You Got Me” rapper takes listeners through his intimate journey, including his tumultuous childhood in Philadelphia, facing a legal system stacked on him and adjusting to commercial success in the general American public. The project also mixes intricate rhymes with the searing insight of born emcee Tariq Trotter.

Black Thought’s right-hand man in The Roots, Questlove, also released his directorial debut last week with Summer of Soul (… or when the revolution couldn’t be televised). The documentary film takes an in-depth look at the Harlem Cultural Festival, which has been described as a pre-Coachella music gathering and called Black Woodstock.

The Harlem Cultural Festival was a series of free concerts held in 1969 over six weekends that drew over 300,000 people. Some of the musical guests in the concert footage included Stevie Wonder, Nina Simone, Gladys Knight, The Fifth Dimension, and Sly and the Family Stone. Summer of the soul is currently in theaters and streaming on Hulu.

You can listen to Black Thought 7 years audiobook at www.audible.com. Also watch an excerpt from Summer of the soul below.